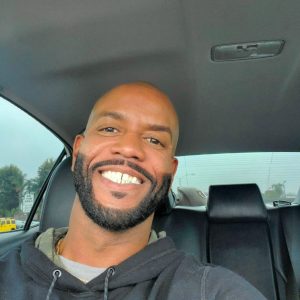 Darnell Thompson, BA – Growing up in a difficult home and facing various forms of adversity, Darnell Thompson followed in the footsteps of many great people who made the choice to overcome obstacles in life rather than succumb to them. Such great people include Mahatma Gandhi, Rosa Parks, Oprah Winfrey, Thomas Edison, Jesse Owens, Tom Cruise, Fredrick Douglass, and many more[1]. A firm believer that adversity builds character and overcoming odds is just another way to achieve success, Darnell Thompson subconsciously and consciously followed the words and examples of Jesus Christ by setting goals, achieving those goals, utilizing his skill set to advance his life and career beyond the statistical averages, and along the way helped to support and elevate many others to succeed at tasks they never thought they were capable of, or had just given up on achieving. Darnell Thompson used his childhood to strongly influence his views on pursuing opportunity, not giving up, compassion, and the spiritual attainment of connectivity between the mind and body. Darnell Thompson is a firm believer that “luck doesn’t just happen, for the most part it is created by you, the ultimate responsibility for success in my life and limitations that hold me back begin and end with me and are completely controlled by me” says Darnell Thompson. Only you can control you, and the willpower a person has been given by God can be used to achieve any level of success a person desires. Darnell Thompson reads regularly to exercise his mind just as he works out daily to exercise the body. He combines the two to advance his own spirituality. God and Jesus Christ’s teachings mean something different for him today than it did to many in the day of old. Darnell Thompson was one of many who grew up Catholic but grew away from religion because of its hypocrisy and teachings that were extremely different and distant from his own life experiences and much different than his own beliefs. Darnell Thompson was fortunate to find the support of his coaches who helped guide him to focus on his studies and athletics which led Darnell Thompson to receiving a scholarship to college and to graduate with honors. Darnell Thompson realized his childhood dream of becoming a professional basketball player early in life when was recruited to playing professional basketball on an intercontinental level. Even after college Darnell Thompson continues to enhance both the body and mind by reading for the benefit or educating himself, learning foreign languages to enhance the mind, as he continues to develop his fitness skills and helps teach large groups of people how to attain a spirituality that is achieved through activities in fitness bringing you closer to Oneness with God and the person of Jesus Christ. The traditional is like an antique, it is valuable and nice to look at but not useful in today’s world, it sits on a shelf as a reminder of the past with little to no utility today other than a reminder of the tradition. Darnell Thompson believes that just like technological and fashion advancements and evolutions so shall the teachings of Jesus Christ evolve for the benefit of a modern society. Why lose religion altogether when it can be attained with a simple change in the way scripture is taught or the context in which it is understood. Darnell Thompson has taken his knowledge of health and fitness and for greater than 2 decades has devoted himself to assisting and supporting others to a more enriched embetterment of oneself through fitness. It is through his fitness that he came in contact with co-founders George C Hutchinson, Esq. and Ron J Kort MBA helping them work through back issues in one instance from a physically debilitating back injury preventing the ability to jump even 2 inches above the ground and turning it into a thing of the past as if the back injury never existed at all. Darnell Thompson believes and professes that through faith and belief all things are possible and there is no such thing as impossible.