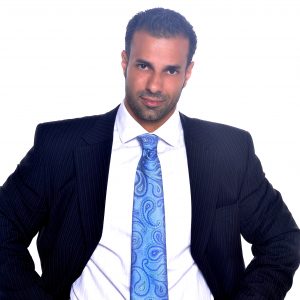 Ron J Kort, MBA – Ron Kort is no stranger to adversity as he was raised by strict Catholic Middle Eastern parents who left the Middle East in their early 20s and raised Ron as if he was being raised in those old times. Because of these conservative teachings and his distinct Middle Eastern look during times of the Middle East crisis, he was made fun of and shunned by his peers. Ron Kort was raised in liquor stores, throughout his childhood in predominantly low income, Hispanic communities. He noticed Hispanics making fun of his parents just as he was being made fun of at school. One day he noticed a few younger customers of the liquor store making fun of his mother’s Spanish speaking ability only to notice her say to them, “I speak my language (Arabic), your language (Spanish), and English, let me see you speak my language before you make jokes about me speaking yours." Ron’s dad came to this country from the Middle East and persevered through adversity as he worked whatever jobs he could take as he sent money home to his mother and saved until he purchased his first liquor store. Ron’s mother and father worked together building together. Ron’s father taught his mother to ignore the negativity of customers who came in to their stores and to realize that by running the store and succeeding at it Ron’s dad and mother were succeeding at the life goals and directions while others were not of the same goals or direction. Ron thereafter came to silently appreciate that the taunts of others became a key indicator of a success that those making the taunts failed to achieve. Ron Kort quickly realized in life that everyone’s goals in life are not equal and to appreciate and tolerate the difference in people’s goals. And that the lack of compassion for driven minded people ran more aggressive and against the success of others than to support the success of others. It’s easier to laugh at why someone is stumbling to success than appreciate what others had to do to become successful. Ron is a firm believer that “God Helps Those Who Help Themselves…. There is no limit to the human ability to adapt and absolutely no limit to the human imagination to create. There are practical solutions for nearly all challenges in life. There is a right way and wrong way to do things in life and it is our responsibility to find the right way to do things and to use them to accomplish what we decide to achieve for ourselves”. Even if you believe life is luck driven, you still control your fait by something as simple as believing that “You can’t win the lotto if you don’t buy a lotto ticket.” If you ask people, even today can man fly over a skyscraper, their response is customarily “no” to which Ron replies “then what are airplanes or jetpacks?” Anything in life is possible if you keep the faith, believe in success and drive yourself to achievement. Ron was raised in the traditional Catholic methods, but through his experiences in life understands the need for today’s society to associate with faith differently. Ron has never shied away from or has been intimidated by a lack of experience but rather has been taught to find and see an opportunity within each experience. With a thirst for knowledge and the willingness to find and connect with the right people, anyone can begin to carve out a path for him or herself, to succeed in life and faith. Nothing is hard, it is just different. And if you find ways to progress your way to the end result you too can achieve any level of success that you desire in your life. This is also true in his belief about religion. Ron Kort has connected with the ultra-elite and the low income and realized the blurred lines between them in fitness and health. Utilizing his experiences and beliefs that anything is possible and bypassing adversity Ron Kort at the age of 22 was the youngest in his class to graduate from Loyola Marymount University’s Graduate Program with a triple Master’s Degree emphasis in (1) International Business Management, (2) Management Information Systems, and (3) Business Finance. Ron Kort earned his first million at the age of 27. No stranger to adversity Ron Kort has successfully used his faith to overcome obstacles and to move towards success and has always had a passion for helping others.